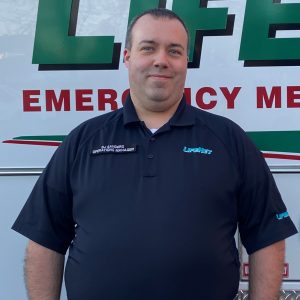 
Douglas “D.J.” Sanders was named a 2022 Star of Life for LifeNet, Inc. in Hot Springs, Arkansas.

Born and raised in Hot Springs, D.J. graduated from Lakeside High School in 2002.

“I was a senior in high school on September 11, 2001. I was inspired seeing people helping people during that time,” he said.

At the age of seventeen, a cadet program at the Garland County Sheriff’s Office kicked off his career path to becoming a First Responder.

“Through the program, I spent time observing in the juvenile jail, the adult jail, and the radio room. I also got to do ride-alongs with a deputy. When I got into the radio room, I fell in love with it. There was technology, and the 911 system was exciting to operate,” D.J. recalled. “A dispatcher is the first First Responder ‘on scene.’ I did one ride-along with a deputy and the rest of the time was in the radio room.”

In 2002, D.J. accepted a paid dispatch position working in Hot Spring County, Arkansas. Three years later, he accepted a position dispatching for the Hot Springs Police Department. In 2009, he started dispatching part-time for the Garland County Sheriff’s Office, and, in 2012, he took a part-time position as an Emergency Medical Dispatcher with LifeNet, Inc.

“I was working as a law enforcement dispatcher and was looking for ways to advance my career. I had decided against being a police officer, so I looked for an alternative form of emergency services. I had become phone friends with the dispatchers at LifeNet. When there was a part-time dispatch position, I took it. EMS became my new career. Being able to provide medical assistance to someone in need is an amazing feeling,” he explained.

One of the requirements for working in dispatch at LifeNet was going to EMT school.

“I had spent twelve years working behind a desk. After I obtained my EMT and started working part-time on the ambulances, I realized my desk now had a windshield. That was a good feeling. I felt like I had freedom,” he said. “Yes, you have to run calls, but you’re driving around and moving and getting to meet new people. No day is the same. The look of relief on someone’s face when they see that help has arrived is priceless to me. That’s what keeps me doing this job.”

A drive to grow within the EMS industry inspired D.J. to go to Paramedic school.

“I had thought about going into a management role in the future, so I went to Paramedic school to enhance my knowledge base and be able to move up the ladder in management,” he said.

“This is going to sound so cliché. I love my job. My job is my life. I put the ‘life’ in LifeNet,” he said. “I enjoy being able to serve others. I do not really have hobbies because my job is my hobby. My coworkers are my friends. If I can be here supporting our crews, I want to be here.”

D.J. was nominated by his peers to be a 2022 Star of Life for his devotion to his job and his colleagues. He goes above and beyond to help both his coworkers and his patients, and is the epitome of what a LifeNet Paramedic and Supervisor should be. After losing a LifeNet colleague last year, D.J. immediately began taking care of others. He made the calls that needed to be made, ensured that everyone had the resources they needed, and shouldered all the responsibilities of the difficult situation. To D.J., his colleagues are family, and family takes care of each other.

When you can get D.J. to take time off, he enjoys spending time with his family and his dogs. He is always up for a good road trip and seeing new places as well.