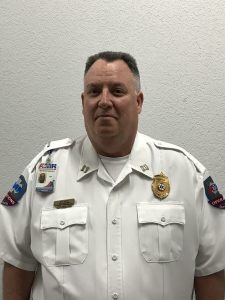 Jeff Boyd is a positive influence and a mentor to many. Referred to as the “backbone” of Linn County operations, Jeff stresses the importance of his work as there are only five first responders on duty at a time in Linn County. The county has a population of around 10,000 who are spread out over a large rural area and it does not have a hospital. An EMS transport can take more than forty minutes. As Jeff will remind everyone, “acting with urgency is crucial” in such an expansive region.

Jeff’s career path includes the military, where he spent twenty years in the U.S. Air Force as a deployment medic. During the second half of his service, Jeff went to Independent Duty Medical Technicians (IDMT) school and took part in a special response group that conducted surveys in the Pacific region. Based in Guam, the surveys he conducted were associated with a disaster-planning effort that also had him travel to Mongolia.

Jeff retired from the military in July 2007, then joined AMR that August. He describes AMR as an organization that “focuses on people over profit” and that aims to get team members what they need so that they can do their jobs in the most effective way possible.