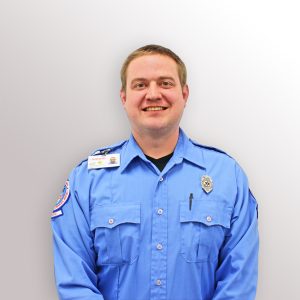 
Justin Rowe is described by his colleagues as humble, kind, thoughtful, supportive, and dedicated. According to many, Justin is a superb team player who understands the responsibility of delivering prehospital care to the citizens of Mecklenburg County, North Carolina. Justin takes a great deal of pride in working with the NET team and delivering excellent care to the patients and the families MEDIC serves. Justin works not only to meet the Agency’s standards of behavior for providing outstanding care, but he exceeds expectations by displaying professionalism and compassion towards every patient. Justin’s outstanding patient care frequently results in families requesting him by name.

According to his supervisor, “Justin is, by far, one of the hardest working employees we have at MEDIC. His dedication to our patients and departments is of the highest caliber. I frequently rely on Justin to make sound operational decisions and to mentor others without prompting.”

Justin began his career with MEDIC as an EMT in June 2007. He quickly moved up to function as one of the first BLS team leaders on the Non Emergency Transportation (NET) team. He then pursued his Paramedic certification. When the ALS NET team was transitioning from HP to solely ALS NET, he was one of the few that remained on NET. He spoke very positively of the mission of the NET team, inspiring other team members to stay instead of going back to 911. In September 2016, Justin stepped up to become a full-time crew chief without question or hesitation.

Justin has also worked closely this year with Special Operations during large-scale events. He assists crews who are less familiar with the UTVs, trouble shoots tablet connections, helps determine the best access points to patients in highly congested areas, and is familiar with the Command Center. Lastly, Justin also worked with Logistics during a time of reduced staffing, simply because he wanted to help his colleagues. Justin learned how to support the department by checking out gear and narcotics to incoming and outbound crews.

In addition to his work in the field, Justin has taken on a variety of additional responsibilities at MEDIC. For example, Justin is a safety instructor and trains new employees to operate MEDIC vehicles. He also mentors new staff as they transition to working in the field. The work Justin has done and continues to do has been vital for the success of our new agency driving program. Justin also dedicates his time off-the-clock working as an instructor for the Safe Teen program, which works to educate young adults on the responsibility of safe driving.

Justin is very humble and would never shine the spotlight on himself. Over the course of his career at MEDIC, Justin has worked hard to better himself as well as to being the best care provider possible. For these many reasons, MEDIC is proud to recognize Justin the 2019 Stars of Life award.