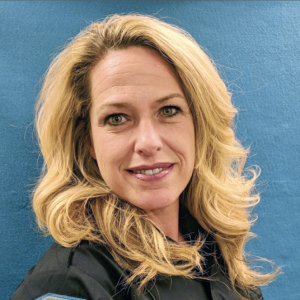 
Loretta (Lorie) Burton is being honored as a Star of Life for her actions that saved the life of a cardiac arrest patient in April of 2019. On that day, she and her EMT partner were called to a dental clinic parking lot where they found an 81-year-old male in cardiac arrest. With the help of her partner, Lorie began CPR and then continued ALS care on her own. Lorie was able to establish a return of spontaneous circulation and the patient was transported to the emergency department of a local hospital. He was released a few days later with no neuro deficits or cardiac damage. This save was a direct result of Lorie’s dedication to the patients she serves. That dedication perhaps was demonstrated best when Lorie was the medic on the scene of a car accident involving the man who had earlier tried to shoot her policeman husband. She treated this patient with respect and he received the best of care, as anyone who knows Lorie knew he would.

Lorie has been in EMS for 18 years. She began her career as an EMT and continued her education to become a paramedic. She attained the rank of supervisor but reduced her hours to part-time to care for her five children. She is a proud member of the Youngstown community.