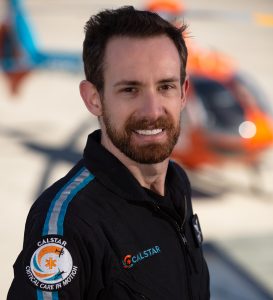 
Michael Gibson is being honored as a Star of Life for his unquenchable curiosity and desire to invent medical devices that improve patient care and treatment. During the early days of the pandemic, Michael discovered that there was a lack of proper equipment to ventilate patients. So, rather than trying to find an improper fitting oxygen mask or using another oxygen device outside of its intended purpose, he invented a new oxygen mask. This new mask provides oxygen to the patient while also providing negative pressure around the patient’s face that stops the aerosolization of droplets. The new mask basically keeps a patient from infecting others around him. Michael’s invention eventually got the attention of General Motors, which became interested in producing the medical mask. However, once the pandemic began to wane, GM’s interest did too. But that has not stopped Michael from moving forward with his idea. He is currently working on receiving FDA approval for his innovative invention.

In addition to his creative spirit, Michael is known as a selfless steward who loves to share his knowledge with new nurses, Paramedics, and others who work in the field of patient care. He is articulate, self-motivated, and considered by his peers as a leader in medical education.