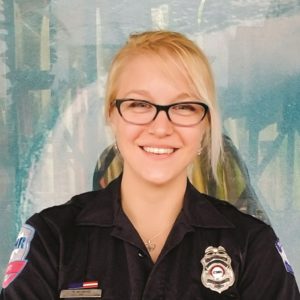 
On May 18, 2017, Nicky and her partner, Thomas Hlava, came to stop at a traffic light. In front of them was what Nicky describes as a “very good-looking Corvette.” As the light turned green, the Corvette started moving forward, and then quickly stopped for no apparent reason. As they were about to pass, Nicky noticed another driver frantically pointing at the Corvette and making a choking sign.

Nicky immediately placed the ambulance in park and approached the driver’s side of the vehicle, where she observed the driver slumped to the side and not moving. The vehicle started to move forward, and Nicky sprinted after it. The Corvette was still moving forward at about 5 mph when Nicky finally caught up to the car. She could hear fast gasping respirations coming from the driver, but the door was locked. Luckily, the window was down, and Nicky leaned through it to activate the emergency brake, stopping the vehicle.

At this point, she tried to rouse the patient, but he remained unresponsive. Nicky attempted to locate the inside door handle but couldn’t find it. At last, she was able to lower the passenger side window to climb into the vehicle and turn off the engine.

Nicky then performed a pulse check on the driver, which revealed no pulse. She began chest compressions from the passenger seat. With the assistance of her partner and an off-duty Rural Metro Paramedic, a monitor was attached which identified the patient was experiencing ventricular fibrillation. It took two shocks, but the patient’s heart converted, and he attained a return of spontaneous circulation. An IV was placed and fluids administered, and the patient resumed breathing on his own.

Nicky later learned that she saved Dr. James Mankowski, a retired US Navy Veteran and Doctor of Physics.