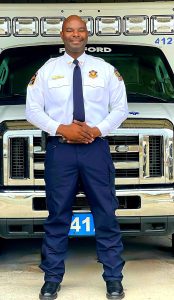 
Randy Murry began his EMS career with Pafford Medical Services in July of 2012 as a part-time EMT-Basic, and later obtained his Paramedic degree from Coahoma Community College. After working as a Paramedic, he also gained several pre-hospital instructor certifications and became an in-house instructor for his peers. Randy currently functions as the Operations Manager for Pafford Medical Services in Coahoma County, Mississippi, overseeing the daily EMS system operations, which covers approximately 583 square miles and serves 24,000 citizens.

Outside of his daily duties as the local EMS Manager, Randy also serves as Chief of the Lula Volunteer Fire Department, a part-time Firefighter/Captain and Public Information Officer for the Coahoma County Fire Department, and the Subject Area Instructor for Coahoma Community College. Randy displays extreme dedication to his county and crews. He possesses an “all-in attitude” and continues to strive for excellence daily. During his tenure as Operations Manager, he has increased crew morale and raised the bar on personnel accountability tremendously. He believes that leading by example is the only way to run a successful operation.

In 2019, while working as Operations Manager, Randy responded to a report of an apartment fire with dispatch advising that the caller was still inside the residence. He arrived on the scene before the fire department and additional EMS personnel and noticed smoke coming from the residence’s door. He was able to enter the apartment building, safely locate a severely burned victim in the kitchen, and pulled her outside the residence to a safe area.

When he is not providing pre-hospital care or teaching, Randy enjoys traveling and taking part in outdoor activities such as fishing, hunting, and ATV trail riding. Randy has invested many hours in developing a great EMS team for the community he serves. His work ethic is contagious and his crews respect and appreciate his dedication and leadership ability.