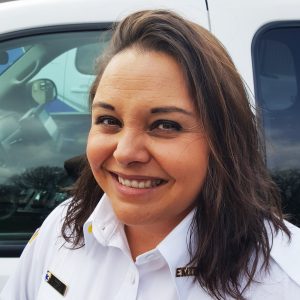 
Rebecca Hartman has grown up in the emergency medical services industry. She has been part of the team at Abbott for the past decade, but first became involved in EMS when she was 16 years old. As Lead Field Training Officer, Becca oversees trainers, conducts case reviews, and helps mentor team members – all while continuing to work in the field.

After several of her team members were exposed to opiates while responding to calls, Becca took it upon herself to ensure everyone was educated and prepared for this potential exposure. She first initiated a training class for employees, and then contacted several local fire and police departments to begin teaching a class on opiate exposures. She wanted to make sure that as many first responders as possible were aware of the dangers of opiates and of how they can decrease the exposure for first responders.

Another example of Becca’s commitment to her community is demonstrated every Friday when she visits a local elementary school to offer high fives and a boost of encouragement to students starting their day. Several other EMTs and Paramedics have also been convinced by Becca to participate in this simple activity which produces extraordinary reactions from the children. Becca’s positive outlook is inspiring. She has earned the trust, respect and admiration of her colleagues, patients, and community.