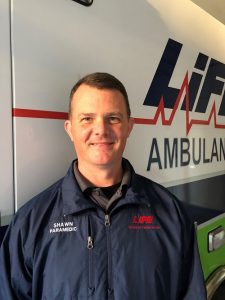 
Shawn Svob is a Nationally Registered Paramedic who works for Life EMS in Enid, Oklahoma. He previously worked as an engineer for several Oklahoma energy and service companies. He also served 22 years in the US Army, both active duty and reserves, retiring as a Major in 2011.

Shawn grew up in Peoria, Illinois, and joined the Army after graduating high school, where he subsequently gained entrance into the United States Military Academy Preparatory School and ultimately the United States Military Academy at West Point. Shawn graduated West Point in 1995 with a degree in mechanical engineering and was then commissioned as a Second Lieutenant, serving two tours in Bosnia in the Stabilization Force. He deployed to Iraq as part of a US Army Reserve group in 2009 where he was responsible for initiating the base closure plan for Victory Base in Baghdad, returning home in 2010. During his time in the Army, Shawn received multiple citations and decorations including the Meritorious Service Medal with three oak leaf clusters, the Army Commendation Medal with three oak leaf clusters, the Army Achievement Medal, and multiple service and campaign awards.

Shawn began his career in EMS in 2011 after joining the Pond Creek Fire and EMS department as a volunteer firefighter and earning his EMT-B certification from Autry Tech. Shawn used his GI Bill education benefits to attend Oklahoma State University-Oklahoma City for paramedic school while working as a Senior Engineer for ONEOK. He completed his training in December 2017 and was selected as the student speaker for their completion ceremony. Shawn earned his National Registry credentials and his state license in February 2018. Shawn left ONEOK in April 2018 to pursue his passion for EMS as a full time paramedic.

Shawn is married to Dr. Erin K. Roberts-Svob, DDS, and has two boys, Cole (14) and Rowan (12). He lives in Pond Creek, Oklahoma, where he continues to serve his local community as a firefighter and paramedic.