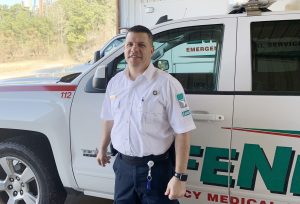 
After nearly two decades at Alumax Mill Products as both union president and a finishing operator, a family accident inspired Shon Matthews to change career paths. In 2003, Matthews was out of town when he learned his son had been injured in a serious ATV accident and taken to Arkansas Children’s Hospital. Listening to his wife and brother-in-law discuss the incident, Matthews realized communities need more people to get involved to save lives.

Shortly after, Matthews joined the Booker Bridge Volunteer Fire Department in Miller County, Arkansas as a first responder. Shortly thereafter, Matthews also became part of the first responder team at the mill where he worked full-time. Through training at the mill, Matthews met a LifeNet EMS Paramedic who told him that he was a natural fit for EMS. Matthews attended EMT school, then began working for LifeNet EMS part-time in 2007 as an EMT while continuing his education to become a Paramedic.

In March of 2009, Matthews joined LifeNet full-time, and a few years later, he was promoted to a Field Training Officer (FTO) role. He quickly proved himself an asset in that position, and in May of 2013, when one of the company’s Operations Managers was deployed overseas, Matthews was selected to temporarily fill that role for nine months.

When it was time for Matthews to return to his role as a field provider, the LifeNet Air medical helicopter in Texarkana needed coverage for a flight medic who was going out on short-term disability. Matthews was asked to fill-in as a flight medic during that time period. After his term as a flight medic ended, he was asked to help his family start a business. Matthews briefly stepped away from a full-time career in EMS. For the next six months, he worked only call-in-relief for LifeNet as a Paramedic for both the ground and air operations. Matthews eventually realized that his heart was not in the family business, and he made the decision to return to mobile healthcare full-time.

In June of 2016, Matthews was offered a full-time role as a flight medic on LifeNet Air, his dream job. Less than a year later, a full-time position opened for an Operations Manager role. Since August 2016, Matthews has served as full-time Operations Manager for LifeNet EMS in Texarkana, while also continuing to work as needed on the LifeNet Air medical helicopter. It is this dedication and commitment to doing whatever is needed to care for our patients and to serve the community that inspired his colleagues to nominate Matthews for the Star of Life award.

One coworker noted, “Perhaps the thing I have been most impressed by when watching Shon in action is how he is received in the community. As part of my initial training, I made rounds with Shon at three area hospitals. Shon was not only greeted warmly by the staff, but he was also known as a friend at every place we went. I have yet to repeat the experience I had with Shon with any other crew member. Shon has a natural ability to have conversations, build relationships, and represent us in the community in a way that people relate to.”

When Matthews is not working full-time in one of his many roles, he endeavors to educate the community on safety and to build the next generation of EMS professionals. In addition to teaching local first responders for LifeNet Air, Matthews also teaches BCLS, ACLS, ITLS, PEPP, and pediatric first aid. Additionally, he is an instructor in the EMT and Paramedic program at Texarkana College.

When he is not busy fulfilling his EMS duties, you will find Matthews spending time with his wife, Jennifer, and their children, Nicole and Derek. Matthews is an active member of Fairland Holiness Church where he serves as a Sunday School teacher.