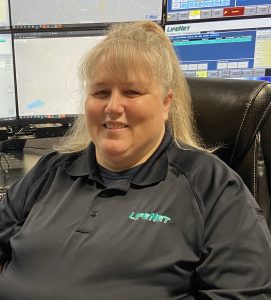 
Stacey Himes has been named a 2022 Star of Life for LifeNet, Inc. in Texarkana, Texas.

From an early age, Stacey knew she wanted to work in the medical field, but a personal tragedy in high school lead her to an EMS career.

“I lived two blocks from the fire station, and I watched those guys all the time. On my sixteenth birthday, my best friend was killed in a car wreck. I was planning to be a nurse, but after that, I felt nursing was probably not where I needed to be. I needed to be out there with those guys on the ambulance taking care of people,” Stacey said, recalling how she got started in EMS in the 1980s.

During her senior year at Atlanta High School, Stacey earned her EMT certification and volunteered for the Atlanta Texas Fire Department. During that time, she also earned her Paramedic certification, and in 1994, she hired on with LifeNet.

“My favorite calls in the world were taking grandma home. I made sure she got comfy and had everything she needed before I left that room. I want people treated like they’re my grandma,” Stacey said.

During her early years working in the field, Stacey taught classes to area first responders. She also responded to a wreck that sparked LifeNet’s community education initiative in the 1990s to hold Operation Prom Nights, a program that brought education about the dangers of drinking and driving to schools across LifeNet’s service area. Stacey served as part of the PR event team.

After she became a mother, Stacey needed to adjust her career schedule to balance work and home. That adjustment saw her move into LifeNet’s communications center as a part-time Systems Status Controller (SSC) in 2000. Three years later, she accepted a full-time role in dispatch, bringing the same level of compassion and patient care she was known for in the field to the patients she now helped over the phone.

“On the streets, I loved getting to put a smile on my patient’s face. You never knew when it was going to be the last one. Going into the comm–center was a little bit different. I can’t go out there and touch the patient, but I can tell someone how to take care of the patient,” Stacey said. “In rural areas, I may have a patient on the phone for twenty minutes or longer. They start the call scared and alone. I stay on the phone and comfort them. I tell them, ‘I’m going to be right here with you, and I’m not going to leave you.’ Through the phone, I’m able to hold their hand until the ambulance gets there. By that time, I often have them laughing instead of scared.”

In 2005, Stacey’s husband, Larry, took a job in Cleveland, Ohio, and she left LifeNet. Five years later, she returned to the area and joined the LifeNet family again as an SSC. Since then, she has held various leadership roles, including a lead and a Communications Training Officer.

“I like training new people. It’s furthering my legacy. At one time I helped the patient in the field. Then I was able to get on the phone and help. Now I can say I’ve taught somebody how to tell somebody how to save a life on the phone. It’s another level of reward,” Stacey said. “I tell new employees they are lucky. They get paid to help people. I tell them to sit back and enjoy their job being able to take care of the patients. It is rewarding being able to help people in a situation they wish they never would have been in.”

Stacey was nominated as a Star of Life by her peers and selected by a committee of former Stars of Life at LifeNet, Inc. Her peers describe her as someone who is constantly looking for ways to improve education and to help others. She has an excellent work ethic and is consistently dedicated to her job, encouraging others and boosting morale in the process.

When Stacey isn’t working at LifeNet, she enjoys spending time with her husband, two daughters, and her grandbaby.