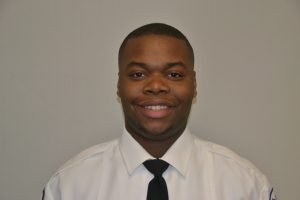 
Widmac Laterion began his career in mobile healthcare in 2013 when he began working as an EMT at the University of Massachusetts, Lowell. While at school, Widmac quickly became a Field Supervisor for the program with an interest in teaching new recruits. Widmac played an instrumental role in restructuring the summer training/field internship program. He earned a degree in Nutrition/Pre-Med in 2017.

Widmac joined Cataldo Ambulance Service in 2014 as an EMT. He soon  transitioned into the role of Field Training Officer. While at Cataldo, Widmac’s passion for teaching others continued to grow, and he began teaching CPR classes. This quickly grew into a leadership role within Cataldo’s On-boarding and Orientation program.

In 2017, Widmac both started a Paramedic school and joined the Army National Guard as a combat medic. In 2018, Widmac received his Paramedic certification and started a dual role at Cataldo as a field medic and educator. Widmac’s long-term goal is to become a physician in the Army.

When not working in EMS, Widmac can be found giving back to his community as part of the Allied Health Academy Program at Everett High School in Everett, MA.