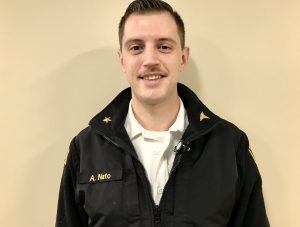 
Adam Nato began his career in EMS volunteering with Castleton Fire/Ambulance, where he acquired his EMT card in 2009. He was hired at Mohawk Ambulance Service in December of 2016 as a Dispatcher for the Communications Department. After a few months, he began working regularly in the ambulance as an EMT. Adam received a Distinguished Service Award in December of 2017 for his hard work. His continuous dedication and professionalism quickly landed him a position as Supervisor, and soon after, Chief Supervisor, where he assists with ePCRs for the company.

Adam is equally as active outside of work as he is on the clock. He enjoys competing in marathons, attending and participating in sporting events, skiing, and hunting. He also takes frequent getaways with his girlfriend and two dogs. He still volunteers in his free time, but now with Defreestville Fire Department which is close to his home.

We are very proud to have an employee such as Adam Nato on our team, and look forward to his continued  growth with Mohawk Ambulance Service.