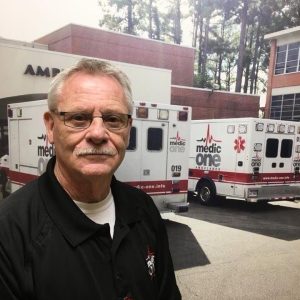 
Benny Ford began his career in EMS in 1976 at the Helena Hospital in Helena, Arkansas. After his mother, who also worked in the hospital, told him the hospital was hiring attendants to provide emergency care to the county’s residents, Benny met with the Director of EMS to learn more. He was immediately captivated by the idea of EMS and began orientation, learning CPR and basic first aid, a few days later. After a few months in the field, he knew EMS was where he belonged.

Benny has served Medic One Ambulance as a Field Training Officer/Educator for more than six years. During this time, he has made a name for himself as the go-to mentor for new employees learning the ropes. He makes everyone feel welcome from the moment they join the team, and is a constant reminder of the importance of the passion and dedication necessary for a career in EMS.

Benny was selected as Medic One’s Star of Life because of his selfless service to a community in need. He has been a Paramedic for more than forty years, and has always demonstrated top-notch clinical skills. He has also been an influential educator across the state, and has taught thousands of providers in PALS and ACLS, as well as in continuing education for recertification for First Responders, EMTs and Paramedics. His dedication to EMS, and his selflessness and hard work has had an invaluable impact on EMS in the state of Arkansas.