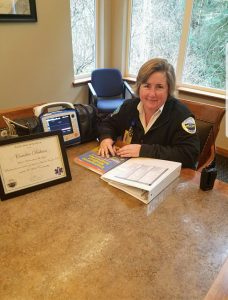 
Candice Dickson’s first day as a paid EMT on an ambulance was September 11, 2001, with AMR Rancho Division in Southern California. A year and a half prior, Candice found herself suddenly widowed and was looking for a sense of control and security, which the challenges of mobile healthcare fulfilled. Of her experience in EMS, Candice says, “I found that I got back from it so much more than I ever expected. I found like-minded people with tons of curiosity and interesting senses of humor, people that took their skills very seriously, but didn’t have to wear their scars.”

In 2003, Candice became a Paramedic after studying at Crafton Hills College in Yucaipa, California. She received a field internship at Yucaipa City Fire, which lead to a paid position as a Call Firefighter, in addition to her full-time Medic job with AMR. Candice also began teaching in the EMT and Medic program at Crafton Hills. In order to improve her wildland fire skills, Candice also worked for a short period for the California Department of Forestry.

Candice moved to Phoenix, Arizona in 2006, and worked for South West Ambulance, before returning to the West Coast and relocating to Lincoln City, Oregon in 2008. She has been a Medic with Pacific West Ambulance (PWA) since 2009, and has enjoyed the challenges of working in a rural community with a rigorous Medical Advisor. In 2017, Candice attended and graduated from the North Lincoln Fire & Rescue Academy, which has allowed her to live her passion for EMS and serve her small community even more.

When not on duty, Candice loves to go fishing.