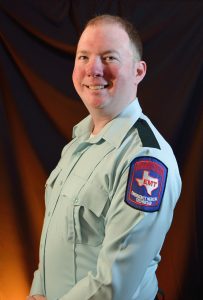 
Pasadena, Texas, EMT Chris Nix, has served Acadian Ambulance for almost six years. Caring for the community runs in Chris’s family: both of his parents worked for a local ambulance service in his hometown in Alabama. In high school, Chris began taking college courses and played in the school band, where he was regarded as the best saxophonist in Alabama, Mississippi, and Tennessee.

Shortly after high school graduation, Chris earned his EMT certification. “After working for several different types of EMS—transport, rural, urban, and metro 911—for seven years, I wanted to branch out and see exactly how far my EMS career could take me. I wanted to work in a large EMS environment where I could learn and be exposed to some of the most advanced technologies available. That’s how I wound up in Houston nearly five years ago,” Chris says.

In addition to his position as an EMT, Chris is a preceptor, adjunct instructor at Acadian’s National EMS Academy, and high school Explorer post advisor. Chris also participates on strike teams assisting areas affected by natural disasters. Chris is considered the voice of reason and a steady hand that guides his Paramedic colleagues.

“Chris is known for two things among our Houston team: his hard work and his people skills,” says his Operations Manager, Adam Fitzhenry.

Chris has been recognized as an EMT of the Year by the City of Pasadena, and was honored for this achievement by Congressman Brian Babin (TX-36). Chris has also won Acadian’s President’s Performance Award for his dedication, commitment, and leadership.