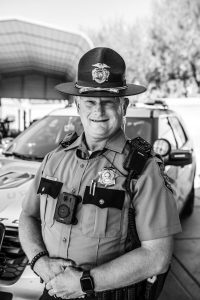 
Clifford Fontaine began his career in EMS at MedicWest (formerly Southwest) Ambulance in 2002 as an EMT-Intermediate (now AEMT). He has been described as “one of the most genuine and caring individuals around,” and was well known for his smile, bear hugs, and commanding saunter. He immediately drew everyone into his presence.

Cliff is being honored and remembered for providing life-saving aid to victims of a multi-vehicle crash that happened while he was on his way home from vacation in Utah. After securing their children in their vehicle, Cliff and his wife began aiding the victims. Cliff relayed the seriousness of the incident to Utah Highway Patrol, giving fellow first responders vital information that helped them to prepare for their response. Cliff even performed CPR on a four-year-old girl while waiting for the arrival of the responders. The girl ultimately survived the accident. All this was done on Cliff’s personal time; he didn’t have to intervene, but he did. He will always be a hero and his compassion and intervention earned him a commendation from the Utah Highway Patrol.