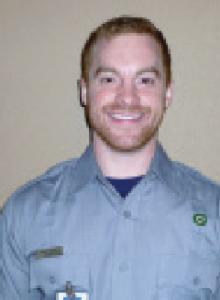 
Cody Chaney’s peers described his attributes well when they nominated him as LifeNet’s Star of Life. Among their accolades were these words: “Cody has great integrity and compassion for his job and for our customers,” “He has held close our mission, values, and vision,” and “His attitude and presence are always uplifting to employees and patients!” Obviously Cody’s personal impact is as strong as his solid clinical contributions to healthcare in LifeNet’s Oklahoma service area. A relative newcomer to prehospital medicine, Cody joined LifeNet a little more than two years ago as a part-time EMT while he worked toward his Bachelor of Science in Fire Protection and Safety Technology at Oklahoma State University in Stillwater. This winter, as his course work neared completion, Cody was able to further impact LifeNet staff and customers by accepting a full-time role. And Cody’s influence extends beyond the workplace. For nine years Cody has volunteered countless hours and entire summers at Shepherd’s Fold Ranch in Avant, Oklahoma providing a place in the country for kids to spend their summer exploring God’s creation. Through his ministry at Shepherd’s Fold, Cody has supported the camp’s vision by planning and executing camps for children, managing properties and facilities, and investing his talents into developing staff and participants. Cody participated on the OSU Firefighter Combat Challenge Team as both competitor and Training Officer. During his tenure the team qualified for World Competition three consecutive years. We are pleased that you can join us in celebrating Cody Chaney as our 2014 Star of Life.”