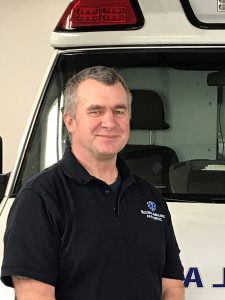 
Daniel Neazor has been a Paramedic with Woodburn Ambulance since 2006. Over the years, Daniel has developed into a key member of the organization, serving as a mentor and leader to countless new Medics entering the field. His commitment to constant improvement of the care given in the field is unmatched.

This past year, Daniel has spearheaded new relationships between Woodburn Ambulance and many local law enforcement agencies to add Naloxone to the officers’s patrol units. Daniel has personally trained dozens of police officers in the region, resulting in several documented saves. He also teaches leadership to EMS students in our local community college.

Prior to joining Woodburn Ambulance, Daniel served as an Infantryman and Combat Life Safety Instructor in the New Zealand Army. He did two tours with the UN in East Timor, followed by several months as a private contractor in Afghanistan providing security services to the fledgling government.

When not on duty, Daniel enjoys family time in the great outdoors of the Pacific Northwest.

Woodburn Ambulance Service is proud to recognize Daniel as a 2019 Star of Life.