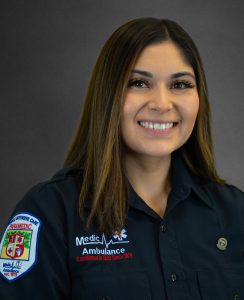 
Daniela Flores is a dreamer. She was born in Santiago, Chile in 1994, and immigrated to the United States with her family at the age of five to pursue the “American Dream.” Daniela was raised in Vallejo and has lived there for the last twenty years.

After arriving in the U.S., Daniela had no choice but to adapt to her new country and learn a new language. She remembers crying every day in first grade because she had no one to talk to, as her twin sister was placed in a different class. After fifth grade, Daniela graduated from Admiral Farragut Elementary School and moved on to Vallejo Middle and High School, from which she graduated in 2012.

When she was fifteen, Daniela discovered that she was undocumented and could not apply for a job as her friends were doing. It was not until 2012 that the Deferred Action for Childhood Arrivals (DACA) program began accepting applications. Daniela applied to obtain a work permit while continuing her education at Napa Valley College. At first, Daniela was unsure what career path she wanted to take, but she knew she wanted to help people. She decided to take an emergency first responder course and immediately fell in love with emergency medicine. She graduated from the Napa Valley College Paramedic program in February 2019, and is currently a Paramedic for Medic Ambulance.

Daniela is being honored for her dedication and commitment to Medic’s Emergency Response Team. Daniela was a part of the Ambulance Strike Teams that deployed to the Napa, Lake, and Butte County fires. She deployed for a total of fourteen days, and did many tasks to assist citizens and caregivers in need. Daniela helped to evacuate hospitals, residences, and skilled nursing facilities during her deployments, all while receiving the highest remarks from her Strike Team leaders. She was also part of the first ambulance responses back into the City of Paradise as medical responders were allowed back into the city. Daniela was recognized by U.S. Congressman Mike Thompson as a Public Service Hero in 2019.

Daniela is a leader in many ways and we are proud to have her a part of the Medic Ambulance Family.