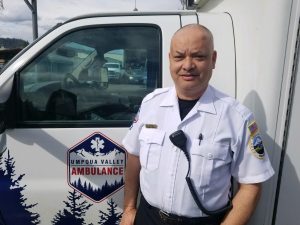 
Prior to moving to Roseburg, Oregon, Bob Wilkinson worked in Virginia for Richmond Ambulance Authority where he completed a certificate in Paramedicine. Bob has served Douglas County, Oregon since 2005, beginning as an EMT with WEST Ambulance in Roseburg while working on an Oregon Paramedic license. A few years later, Douglas County Fire District #2 purchased the EMS division. Currently, Bob is a Paramedic with Umpqua Valley Ambulance in Roseburg.

Over the years, Bob has taken on the role of a quiet, behind the scenes leader. He is always looking for new ways to keep busy, such as volunteering as a Child Safety Seat Technician and teaching part-time for the local Paramedic program as an instructor for Civilian Response to Active Shooter Events and for High Threat Techniques and Tactics. Bob is passionate about the physical and mental health of his crews, and thus also regularly volunteers as a crisis intervention PEER counselor.

On October 1, 2010, Douglas County public safety entities were put to the test when an active shooter threatened the local community college. The mass casualty incident gave Bob the opportunity to analyze the procedures and consider ways in which his crews could improve their response. According to Bob, “EMS is one of the most dangerous service jobs out there. We interact with the public usually during some of the most stressful times of their lives.” As a result, he is working to provide crew members with body armor to use in high-stress situations, as well as to increase training on situational awareness.

Bob has been married for 31 years and has three children. He spends most summers with his parents in Alaska, where he was born and raised. When he is not working on one of his worn-out vehicles, Bob enjoys fishing and reloading. Prior to his career in EMS, Bob worked as a baker and pastry chef, and recently made his daughter’s wedding cake.