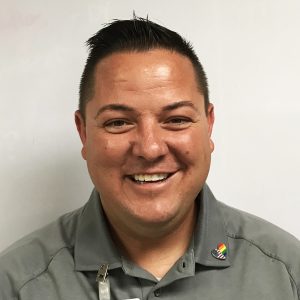 
Jeff Behling proved early last year that knowledge and know-how never take a day off. Jeff was at a junkyard looking for auto parts when an exhaust manifold fell onto another man. Jeff was off-duty but jumped into action. Based on the man’s color, Jeff knew the situation was serious. Jeff determined the man had a potentially life-threatening arterial bleed and directed bystanders to call 911. Jeff held direct pressure on the wound and kept the man alert until first responders arrived.

Jeff is a member of the AMR Emergency Response Team and he has been deployed four times during his four-year career with AMR, most recently to South Carolina after Hurricane Florence. Jeff was a strike team leader during that activation and was on the ground for nearly two weeks. Jeff also recently became an Emergency Vehicle Operator Course (EVOC) instructor and assists with various aspects of his operation’s new employee orientation program.

Jeff was inspired to enter the EMS field by his parents (Jason and Chaña) and his grandfathers, Reed Don Conover and the late Bruce Andrew Behling, both of whom were volunteer EMTs in Utah in the early days of EMS. To say that he’s done them all proud would be an understatement. American Medical Response is proud to recognize Jeff Behling as a 2019 Star of Life.