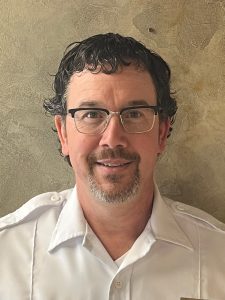 
Kevin Horst is a Paramedic at Bay Cities Ambulance in Coos Bay, OR. He began his EMS career over ten years ago as a volunteer with Bridge Fire Department and North Bend Fire Department, and as a part-time employee with Bay Cities Ambulance. Kevin quickly realized that a career in EMS and working in an ambulance was the way he could best serve others in his community. He decided to leave his career as a Journeyman Electrician to pursue his goal of becoming a Paramedic.

Kevin started as an EMT-Wheelchair Van Driver for Bay Cities Ambulance as he continued to pursue his degree in paramedicine. He spent the next five years working full-time in the ambulance and attending school to earn his Associate of Applied Science and Paramedic degree at SWOCC in 2016. Kevin enjoys his full-time work in the ambulance because he “loves serving his community in this capacity.” He also enjoys teaching the next generation of EMS professionals through actively participating in our FTO and internship programs with the local community college.

When Kevin is not at work he enjoys hiking, backpacking, and hunting with his wife and daughter.