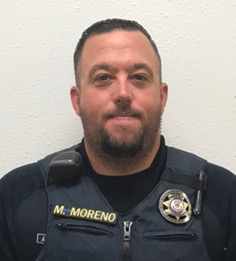 
Matthew Troy Moreno had a heart of gold and lived to serve other people.

While serving as a full-time Deputy Sheriff in our county, Matt decided to volunteer as a firefighter. Matt spent hours training and rose to the rank of Captain. Even that wasn’t enough for Matt: despite his other commitments, he then also elected to become an EMT. He sailed through training, and soon became a part-time employee with the Trinidad Ambulance District. Matt always kept medical gear in his police patrol unit and frequently responded to medical emergencies, often arriving long before the ambulance. Matt was a true public servant.

Matt was also known for his sense of humor and his hilarious practical jokes. He was truly one of a kind.

On the night of December 12, 2018 Matt responded to a domestic disturbance call. While en route, he was struck head-on by a drug and alcohol impaired driver, who was travelling at 96 mph. Tragically, he did not survive. The Trinidad Ambulance District asks that Matt be recognized posthumously for his exceptional public service.

Law enforcement, fire service, EMS; Matt selflessly served our community in every capacity. Matt is greatly missed, and we are all deeply saddened by his passing. Rest easy, brother. We’ll take it from here.