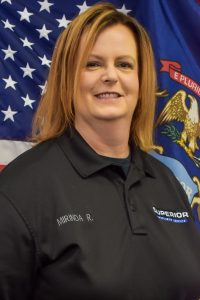 
Mirinda Richardson has worked in the ambulance service industry for sixteen years and began her career at Superior Air-Ground Ambulance Service of Michigan, Inc. in March 2007, first in the role of Receptionist and soon after, Scheduling Coordinator.

In 2018, Mirinda was promoted to Scheduling & Licensing Manager. In this vital role, Mirinda has demonstrated herself to be highly capable of ensuring that the EMS schedule is filled with the appropriate staff, which is crucial to keeping ambulance resources deployed. Mirinda also works in concert with the Superior Education Department to schedule newly trained EMT students for clinical shifts before they enter into full-time positions at Superior. Further, Mirinda is responsible for monitoring licensing credentials for all EMS personnel, along with handling vehicle and agency licensing with the State of Michigan. Throughout the COVID-19 pandemic, Mirinda has tirelessly assured the staffing of EMS personnel during this unprecedented and challenging time.

Mirinda continuously proves herself to be an instrumental leader at Superior, especially at a time when staffing shortages in the industry have presented serious challenges for ambulance services. Her position requires dedicated and constant attention. She always stands up to the enormous task of managing the deployment schedules of 300+ EMS employees, in addition to clinical shifts for 30-50 EMS students throughout the year, and new-hire orientation “third-ride” shifts, along with managing the staffing coverage for large special events, such as the Detroit Lions games. Mirinda also joins operations on-site at Ford Field where she functions as Stadium Supervisor and Dispatcher for Superior personnel at events.

Mirinda is well known for her friendly, composed demeanor, and her positivity and exceedingly strong work ethic serve as an example for everyone with whom she interacts. Mirinda is a mild-mannered, thoughtful professional whose strength lies in her dependable, strong character. She was a key contributor to Superior of Michigan achieving CAAS accreditation in November 2017 and she is easily recognized as a highly valued member of the Superior team.

In her personal time, Mirinda enjoys spending quality time with her family and is a proud mother of three. Her son, Justyn, recently completed service in the U.S. Navy with the rank of Petty Officer Second Class, after being stationed at the Norfolk Naval Station in Norfolk, Virginia. Mirinda lives in New Baltimore, Michigan with her two daughters: Mia, a college student, and Adrianna, who is in middle school.