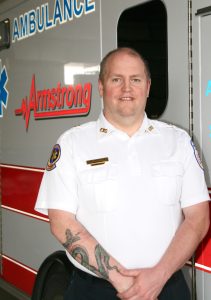 
Nick Henderson started his EMS career wanting to follow in his family’s footsteps as a third-generation Firefighter for his hometown in Norwell, MA. He finished an EMT program in 1999. At that time, Norwell was moving towards becoming a Paramedic-level service and Nick was advised to get his Paramedic certification before applying. In order to gain the year of 911 experience required for the Paramedic school application, Nick got a job as an EMT with AMR in Brockton. He quickly moved to the Boston metropolitan area and started with Newton Rescue 1, a dedicated BLS 911 truck. In 2001, he was accepted to EMTS Inc. with Cape Cod Community College (CCCC).

Nick finished medic school with EMTS, Inc. and CCCC in late 2002. After all that time, he found firefighting was not a fit for him, and decided he wanted to be in the medical field instead. He started as a Paramedic on March 29, 2003, a date he remembers well, as it was one week after his wedding.

Over the years, Nick worked for a few different EMS agencies, but finally settled with Armstrong Ambulance in 2012. During Nick’s tenure, Armstrong has received many heartfelt notes from patients thanking him for his compassionate care. He worked his way through several positions at Armstrong, including Field Training Officer, Training Coordinator, and Field Operations Manager, and currently is proud to serve as Senior Clinical Manager.

According to Nick’s colleagues, Nick is passionate about the ins and outs of EMS and strives to constantly improve himself and all those around him. When Nick was promoted to Senior Clinical Manager, instead of retreating away to his office, he continued to work plenty of shifts on the front lines. It is not uncommon to spot Nick working an emergency shift on the weekends, gaining feedback from other field providers and spreading his vast knowledge to those who are hungry to learn. Nick is a talented Paramedic who pays great attention to even the slightest of details. He truly listens to his patients and takes the time to get to know each one. He often leads teams through uncertain and nerve-wracking situations while maintaining a calm demeanor that allows his team and patients to feel secure in his care.

However, it is as an educator that some of Nick’s greatest qualities are truly on display. Nick is dedicated to helping our providers reach clinical excellence. He is thorough, approachable, and patient when training new providers, and never fails to lend a hand to those whom he knows may be too scared to ask for it. Nick encourages questions and never shames those around him for not knowing something. He famously states “the stupidest questions are those never asked” to almost every trainee or provider he works with. Nick is constantly looking to better himself and dedicates his time to improving his clinical and interpersonal skills.

When not on duty, Nick enjoys spending his time with his kids, as well as being outdoors – hunting, fishing and ATVing.

Armstrong Ambulance is proud to call Nick Henderson our 2022 Star of Life!