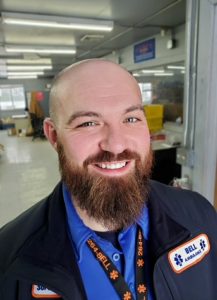 
After graduating high school, Russell Johnston attended UW-Milwaukee to become a physical therapist. After a year, Russell was not sure that was the path for him, though he knew he wanted to help people. He decided to leave UW-M and enter into the firefighter program at his local technical college. There he enrolled in an EMT course and, after its completion, decided that EMS was the career path for him.

Russell began his EMS career with Bell Ambulance in 2008. After a few years of ambulance work in Milwaukee, Russell became an EMT Crew Chief. He next joined Bell Ambulance and Children’s Hospital of Wisconsin Critical Care Transport team. Through his hard work, dedication, and ever-present positive demeanor, Russell became a highly valued member of the transport team. He also advanced to the position of EMT Supervisor, which he excelled at and quickly garnered a positive reputation as a supervisor and caregiver. Russell has the ability to establish a good rapport with both patients and employees, while always maintaining the highest degree of professionalism. As a result, Russell was asked to take on a new challenge within the Client Services Department as a liaison between the company and its facility clients. Soon after, he became the Client Services Supervisor, and, in 2020, was again promoted to Client Services Coordinator.

In his personal life, Russell cares for his rescued English bulldog, Tilly, and gives back by both coaching and refereeing high school powerlifting at the local, state, and even national levels. In fact, Russell is a two-time Powerlifting State Champion!

Russell was voted Employee of the Year and Star of Life in 2019 by his peers.