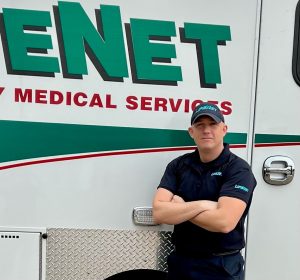 
Ryan Field has been named a 2022 Star of Life for LifeNet, Inc. in Stillwater, Oklahoma.

Born in Stillwater and raised in Ponca City, Ryan grew up wanting to be a professional baseball player. After graduating from Ponca City High School, he served in the U.S. Army for four years as a Combat MOS.

“After high school, I started thinking about my career path. I had welding certifications but didn’t want to weld. I thought about college. I just felt I wasn’t disciplined enough at that time. I thought the military would help me. 9/11 had happened a few years before I graduated high school, and I wanted to be able to contribute. I also had a family background in the military, and I felt like it was my turn to serve,” he explained.

During his military career, Ryan served with the 2nd Infantry Division in South Korea for one year and the 1st Cavalry Division out of Fort Hood, Texas for three years. He also fought in Northern Baghdad from 2006-2008 with the 1st Squadron 7th US Cavalry.

“It was the Army and serving oversees that spurred my interest in fire and EMS because I saw a lot of things and went through a lot of things where I felt helpless. I started to pursue firefighting, and during EMT school I found out how much I loved the ambulance and the EMS field. I got on at LifeNet and it took off from there,” Ryan said, explaining his start in EMS.

“I think the whole goal is helping people. Being the person who can respond to a 911 call in someone’s time of need is what I enjoy most about working in EMS,” Ryan said. “I’m not much for sitting around in a hospital or an office. I like being out in the field. I like being on the move and in different environments. I like the critical thinking aspect of being a Paramedic. The more critical and challenging, the more I enjoy it.”

Ryan started his career at LifeNet in 2011. Over the course of his career, Ryan has served as a Field Training Officer and as an Operations Supervisor for the company. He also serves as a Flight Medic part-time for another agency.

“I enjoy training people. I trained a lot of people in the military, and I was a welding instructor while I was going to EMT school. I knew I could impact other people by teaching and training,” Ryan said, explaining why he became an FTO. “I really looked up to my instructors and mentors and felt it would be neat to bring in the next echelon of EMTs and Paramedics like they did.”

When Ryan was selected as the Senior Operations Manager for LifeNet, it was an opportunity he could not pass up.

“The leadership position lets me combine two of my passions. Not only do I get to help hire our team and teach and educate people, but I also get to respond and assist our crews on critical calls and difficult situations,” Ryan said. “I like being able to respond to situations when one of our crews is out on the streets needing help.”

Ryan was nominated for the Star of Life honor by his peers for being an “excellent supervisor, mentor, and friend to all.”

When Ryan is not at work, he enjoys being out on the lake on his boat or playing sports. He is married to Tori, and they have three children.