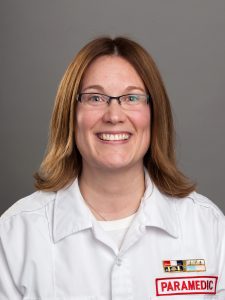 
Sondra Bergem was born in Fargo, ND and grew up just outside of Horace, ND, where she attended the West Fargo Public Schools. In her high school years, she developed an interest in the medical field by participating in Meritcare Hospital’s High School Explorers program. Sondra began volunteering for Horace Fire & Rescue just after graduating from high school in 1993. In 1994, she became an EMT and continued to volunteer throughout her college years. Upon graduating from Minnesota State University Moorhead in 1997, she began Paramedic school at F-M Ambulance, now Sanford Ambulance, and was offered a Paramedic position in 1998.

Over Sondra’s last twenty-four years at Sanford Ambulance, she has played active roles in the early development of the disaster team in the early 2000s, with the Ambulance High School Explorer program, and as a liaison for rural rescue squads. In 2013, Sondra was chosen to be a part of a pilot program for the initial Community Paramedic program for the state of North Dakota and at Sanford Health. She has worked to train new EMTs and Paramedics, worked with patients one-on-one in the Community Paramedic program to take care of patients in their own homes, worked as a Flight Paramedic in the hospital’s air-medical program, and treated and transported thousands of ground ambulance patients. Today, Sondra remains an active member of the Quality Insurance Committee, a Field Training Officer, and Charge Medic for her shift, obtaining the rank of Sergeant. She has been a union steward serving her fellow co-workers for the past sixteen years and is currently serving as the president of the local union.

Sondra is one of the most empathetic and compassionate pre-hospital care providers that you will find. Her numerous years of experience and training allow her to provide some of the best possible care when you call for help in your greatest time of need. Sondra is always willing to go the extra mile to make sure that all of her patients are well taken care of.

In her spare time, Sondra enjoys spending time with her family, watching baseball, spending time at the lake, and traveling. Sondra is married to Chris, who has served twenty-two years as an officer with the Fargo Police Department. They make their home in Fargo with their daughter Riley, age 8.