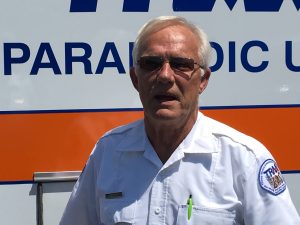 
Terry Masters is an EMT Advanced for the Three Rivers Ambulance Authority (TRAA) Operations Division. Terry has been in public safety for the past 40 years, and was nominated as a Star of Life by his peers for his professionalism and his extensive dedication to his community.

Terry is always maintains a positive attitude while at work. He makes the job enjoyable for everyone, and is ready and willing to assist both his colleagues and his community. Terry goes the extra mile, and takes extra care of his ambulance to ensure his patients have the cleanest unit in the fleet. His commitment to patient care and his ability to outwork many of his younger peers are what make Terry stand out as an EMT. TRAA believes Terry is one of the reasons for its great patient satisfaction scores.