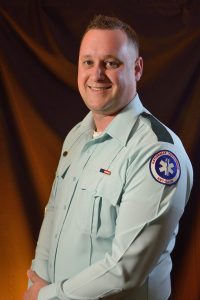 
Southwest Louisiana native Tyler Weaver has served as an EMT with Acadian Ambulance for almost five years. Tyler works out of Lake Charles and was previously partnered with fellow Star of Life, Paramedic Mike Richard.

Tyler enrolled in college to study nursing but found that he was not called to work in a hospital setting. Instead, Tyler earned his EMT certification and has enjoyed every moment working for Acadian.

Tyler has established himself as a courteous, compassionate, and professional patient care provider. He has a strong work ethic, positive attitude, and attention to detail, which have earned him respect from Acadian’s management team as well as Tyler’s peers, patients, and customers.

In addition to his EMT role, Tyler is also a new hire preceptor.

“A motto I try to live by every day is something an old school medic once told me: ‘To know one patient felt better due to my actions makes it all worth it,’” Tyler says.
Tyler is currently attending Acadian’s National EMS Academy to earn his Paramedic certification, with plans to remain at Acadian for the duration of his career.

Tyler has one young son. He is also an avid scuba diver and has visited the Bahamas, Costa Rica and the Cayman Islands.