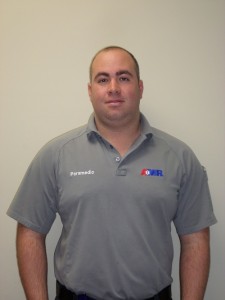 
Liosdan and Lesyan Borges are partners from AMR’s Miami Operations and have similar backgrounds. Both immigrated at a young age with relatives to the United States from Cuba. Their strong family values, along with a close knit childhood, have contributed to their success in EMS and in their abilities to help others in their times of need.

While on duty, these crew members discovered a horrific motor vehicle accident on the interstate. A stranded motorist, who had been trying to repair a stalled vehicle, was struck by a passing car and sustained life-threatening injuries. The crew immediately took charge and quickly responded. After radioing in a trauma alert, they rendered both BLS and ALS care, and provided treatment to the patient which has been credited as saving his life. Unknown to the crew at the time of the incident, the patient was an AMR co-worker who was on his way home from work.

Because of the partners’ quick thinking and their strong clinical abilities, they saved the life of a colleague.