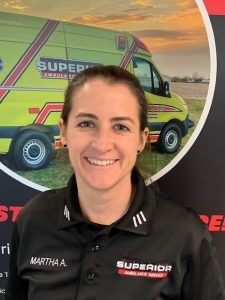 
Martha Augustine became an Emergency Medical Technician and began her EMS career with Superior Air-Ground Ambulance Service of Illinois in 2006. In 2008, she obtained her Paramedic license. For a short time, she worked in Central Illinois, handling 911 and inter-facility response before returning to Superior to assist with the Deepwater Horizon BP (Gulf of Mexico) Oil Spill and with special events. During her EMS work at the oil spill disaster, Martha met her wife.

Martha enhanced her Paramedic credential by attending the University of Maryland, Baltimore County (UMBC) Critical Care course, which allowed her to work as a full-time Critical Care Transport (CCT) Paramedic. In 2016, she became the CCT Station Manager for Illinois, and continued through the ranks to become the Wisconsin and Rockford (Illinois) Regional Operations Manager in 2019. With her excellent leadership skills, Martha was the obvious choice to lead Superior’s Wisconsin operations as General Manager in 2021.

Since then, Superior of Wisconsin has opened seven new stations and has gone “live” with providing ambulance service to ten hospitals and two free-standing emergency departments. Martha has excelled in this role despite major changes during an EMS staffing shortage and the COVID-19 pandemic. On the horizon, Martha will lead the opening of Superior of Wisconsin’s eight stations. It is because of Martha’s fantastic leadership during significant growth and for the way she has faced the challenges in the industry during these unprecedented times that she was selected as a Superior 2022 Star of Life.

While not working on an ambulance caring for patients, leading the Superior team in Wisconsin, or helping with other important initiatives at Superior, Martha surrounds herself with the people, places, and animals she loves. She enjoys fishing (or pretending to fish) and spending time with her family, especially her wife and nieces, doing anything that involves being by a lake in the summer. She recently started obedience classes with her beloved dog, a wire-haired pointing griffon and black lab mix, who aspires to be a therapy dog someday.