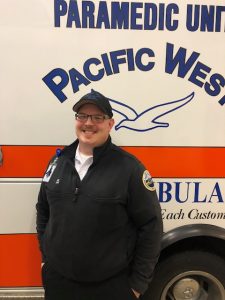 
Nic Heller began working in EMS four years ago after a good friend and neighbor gave him an application to volunteer for Polk County Fire District. After six months of initial training, Nic began responding to calls and was immediately hooked. He received his EMT-B certification and joined Pacific West Ambulance (PWA) two months later.

Nic is currently training to be a Paramedic while working two full-time jobs. In addition to his job as an EMT, Nic serves as a Behavior Consultant subcontractor for the state of Oregon and writes behavior plans for adults that live in assisted living and memory care facilities. He also continues to work as a volunteer for Polk County Fire District. Nic plans to attend the National College of Technical Instruction (NCTI) next year and to return to PWA upon completion of his degree.

Nic and his wife, Cassandra, have two children, Mercy and William, two dogs, and two cats. Nic enjoys spending as much time as he can with his family, as well as playing bass guitar for his local church.