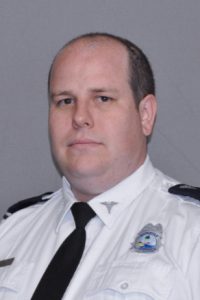 
Paul Allen has worked for Sunstar Paramedics since May 2008. Paul began working in the communications center, and became Emergency Medical Dispatch (EMD) certified in 2012 and then a Communications Training Officer (CTO) in 2016.

As a CTO, Paul trains new hires in channel operations, emergency call taking, and medical radio control operations. Paul is also actively involved in EMD-Q, the process by which emergency and non-emergency calls are reviewed and graded to ensure protocols are followed, the right determinants are reached, and ultimately the right response was sent.

In October 2018, the Sunstar Communications Training Coordinator resigned, and Paul was among several candidates who applied to fill the position. The position was given to someone else, but that person was unable to begin work until January 2019. In the interim, Paul was asked to fill in until the new person could begin and he agreed.

Although he knew the position would only be temporary, Paul did not take his job lightly. Paul used his knowledge of EMD protocols and the Florida Public Safety Telecommunicator (PST) program to develop a new PST training program for Sunstar’s communications center personnel. Paul created PowerPoint presentations for each section of the program and helped communications center staff prepare for the PST exam by giving them review sheets and monitoring their progress through the training program.

Paul also began to revamp the communications center’s training program. Paul created an electronic system for training officers to log candidate progress for training staff to keep up with each candidate’s work. Prior to this system, it was hard for a training officer to know how far along a candidate was in the program and the candidates often lost a day of training if their primary trainer was out. In conjunction with the new Training Coordinator, Paul also began to redesign the exit testing for when a candidate finishes training. Paul developed several scenario-based tests that are now used along with the traditional 50 question exam to assess the candidate.

Although he could have very easily done the minimum amount of work necessary to get by while he filled as Training Coordinator, Paul chose to be proactive and to devote his time to developing training programs that will help new hires and serve as continuing education for current staff. All of Paul’s hard work helps to make the communications center better overall. Paul’s dedication to the office in his short time filling in for the Communications Training Coordinator embodies the meaning of teamwork and shows his dedication to both his job and the field of Emergency Medical Dispatch.