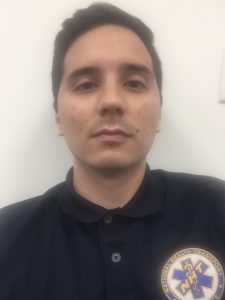 
Sandro Gordillo started at National Health Transport in 2015 as a Dispatcher. During his tenure at NHT, Sandro has excelled through the ranks, earning his EMT license in 2018. He has also served as an Elite Dispatcher and Senior EMT, and is currently the lead QA Officer in the Quality Assurance Department. Sandro is very highly regarded by his peers.

In December 2018, while on an overnight shift in Miami-Dade County, Sandro and his partner, Randy White, were first to respond to an impaired driver incapacitated in a ditch. Without hesitation, Sandro and Randy pulled over to assist the driver who was trapped in the vehicle and appeared to be unconscious from a major head injury. After prying the car doors open without any extrication tools, they began to assess the patient and determined that immediate help was needed.

They acted quickly and summoned for the help of Miami-Dade Fire Rescue, which arrived on the scene, extricated the driver with the Jaws of Life and airlifted the patient to the trauma center. Without the life-saving actions of Sandro and Randy, the driver would have remained on the road all night without help.