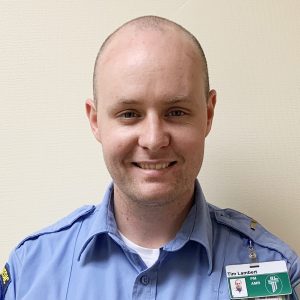 
Timothy Lambert completed his Paramedic field internship at AMR’s Hartford operation, and then joined the team in early 2018.

Last May, just two months into his career as a Paramedic, Tim and his partner responded to what they thought would be a routine medical call involving an emotionally disturbed patient. However, when Tim and his partner arrived on scene, they found a severely injured police officer. The officer had been stabbed multiple times in the neck and was losing blood quickly. Every second mattered. Tim and his partner quickly packaged the police officer for transport, and Tim began treating her life-threatening injuries at once. They arrived at the trauma center within six minutes.

The officer successfully recovered from her injuries. Tim’s rapid response and expert care in the first few critical minutes of the incident were key to the positive patient outcome.